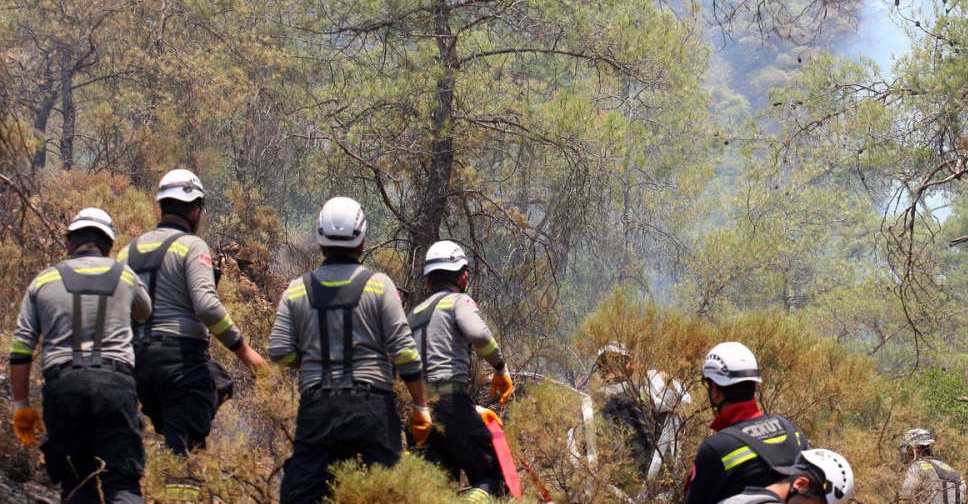 Firefighters sought to contain a wildfire in southwestern Turkey from land and air on Friday as the blaze raged on for a third day, with windy conditions fanning the flames and spreading them through a forested area.

Scenes of burning woodland near the Aegean coastal resort of Marmaris sparked fears of a repeat of last year's fires that devastated some 345,950 acres across the region.

Reuters footage showed smoke billowing from hills as the blaze spread through the woodlands in the sparsely populated area, with helicopters and planes dropping water on the flames throughout the day.

Police helped firefighters with water cannon vehicles as they sought to put out the fire that began around 8:00 pm (1700 GMT) on Tuesday and affected more than 3,400 hectares of land.

Interior Minister Suleyman Soylu said one person had been detained and that he had admitted to burning down the forest out of frustration due to family issues.

Health Minister Fahrettin Koca said late on Thursday that 29 people had been affected by the fire, with two people still receiving treatment in hospital.

Some 274 people were evacuated as a precaution, officials have said.

Last summer's wildfires, most of which were also near Marmaris, were the most intense in Turkey on record, a European Union atmosphere monitor said last year, adding that the Mediterranean had become a wildfire hot spot.

President Tayyip Erdogan's government was criticised for being unprepared to fight the fires last year, especially due to a lack of planes and helicopters. It responded by saying the wildfires were the worst in Turkey's history.

Kemal Kilicdaroglu, head of the main opposition Republican People's Party (CHP), said on Wednesday the government was "incompetent" and had not prepared for the fires since last year.