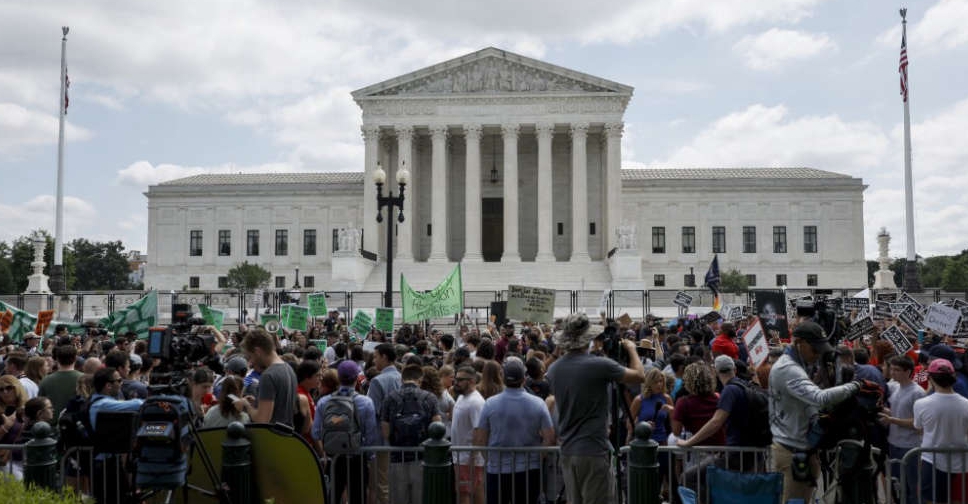 The US Supreme Court on Friday took the dramatic step of overturning the landmark 1973 Roe v. Wade ruling that recognised a woman's constitutional right to an abortion and legalised it nationwide.

The latest move hands a momentous victory to Republicans and religious conservatives who want to limit or ban the procedure.

The court, in a 6-3 ruling powered by its conservative majority, upheld a Republican-backed Mississippi law that bans abortion after 15 weeks of pregnancy.

The vote was 5-4 to overturn Roe, with Chief Justice John Roberts writing separately to say he would have upheld the Mississippi law but not taken the additional step of erasing the Roe precedent altogether.

The justices, in the ruling written by conservative Justice Samuel Alito, held that the Roe decision that allowed abortions performed before a foetus would be viable outside the womb - between 24 and 28 weeks of pregnancy - was wrongly decided because the US Constitution makes no specific mention of abortion rights.

By erasing abortion as a constitutional right, the ruling restored the ability of states to ban it, fundamentally altering America's landscape on the issue of reproductive rights.

Twenty-six states are either certain or considered likely to ban abortion.

Mississippi is among 13 states with so-called trigger laws to ban abortion with Roe overturned.

President Joe Biden condemned the ruling as taking an "extreme and dangerous path."

"It's a sad day for the court and for the country," Biden said at the White House. "... The court has done what it has never done before: expressly take away a constitutional right that is so fundamental to so many Americans."

He said his administration will protect women's access to medications approved by the US Food and Drug Administration including pills for contraception and medication abortion, while also combating efforts to restrict women from traveling to other states to obtain abortions.

A draft version of Alito's ruling indicating the court was ready to overturn Roe was leaked in May, igniting a political firestorm.

"The Constitution makes no reference to abortion, and no such right is implicitly protected by any constitutional provision," Alito wrote in the ruling.